lifeforce started DJing in 1991 and soon became a prominent figure in the german hiphop movement he organized the legendary "Beatz aus der Bude" freestyle sessions from 1997 to 2001 and founded a label by the same name in 2000 releasing turntableism records, mixtapes and a fine selection of German rappers

("funky bus be toungue" - makes no sense but this is how to say it correct) is a 40 year young married DJ and Producer from Cologne, Germany.

He spinns records since 1991 and produces his own tracks since 1999. He produced 3 turntablism LPs by using just 2 Technics 1210 MK2, a Stanton SK2F  Battlemixer, a Vestax VS880 V-Extended Mutitrack Recorder and tons of records to sample them.

Later he added an MPC 2000 to his equpment and produced an art music LP, 2 Club 12" and made soundtracks for dance theater, an electronic musical and created live scoring for the silent picture "Metroplois" which he perfomed about 25 times.

Nowadays he spinns a spectrum from Soul, Funk, Disco, House, Electro to Breakbeat and Nu-Breaks.

He is a guarantor of party and dance.

He serves pure vinyl sets as well as traktor freak or live on maschine.

He's a blast to the crowd. 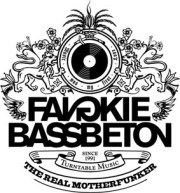 she has been rocking dancefloors around the world

she began touring the globe

Brasil and many many times in Mecixo

in spring 2002 she invented her more housy style

a new star was born

a tastemaker, who started to energize and fascinate audiences

thrown in for good measure

her music is your food - soon more to come!